"Rolling Transition and the Role of Intellectuals. The Case of Hungary". 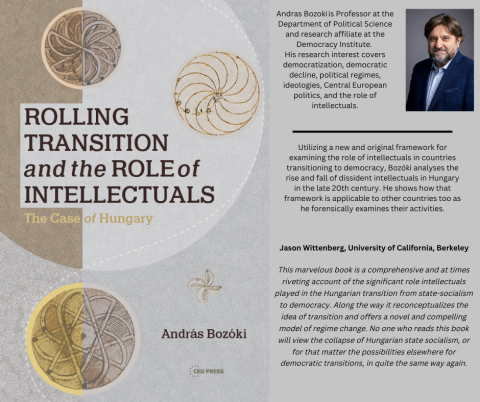 Congratulations to Andras Bozoki on his recently published book "Rolling Transition and the Role of Intellectuals. The Case of Hungary".
PDF version will be freely available thanks to the libraries supporting CEU Press’s Opening the Future initiative: https://ceupress.com/book/rolling-transition-and-role-intellectuals

Gil Eyal from Columbia University writes about the book: “The democratic transitions from communism to capitalism in east central Europe have shaped the contemporary world in an enduring but ambivalent manner. On the one hand bringing the end of communism in a peaceful and negotiated manner and largely avoiding bloodshed and upheaval that were wrought elsewhere was a seminal achievement. On the other hand it also created an opening for populist politics which criticized the “incompleteness” of the transition and sought to undermine democratic institutions. In Rolling Transition, András Bozóki offers the most comprehensive, lucid and penetrating account of this ambivalent transition to date, focusing on Hungary. He shows that the democratic transition was not a single event, but a protracted process lasting almost 20 years, and, paradoxically, partly initiated by the communist regime’s attempt to co-opt the intellectuals. This constant movement, replacement, splitting and reforming contributed to the peaceful nature of the transition, but also allowed it, in the final stage, to be captured by a new generation of professional populist politicians. This book is essential reading to anyone who is interested in understanding the origins of the contemporary political order in east central Europe, as well as to all those interested in how epochal historical change comes about.”