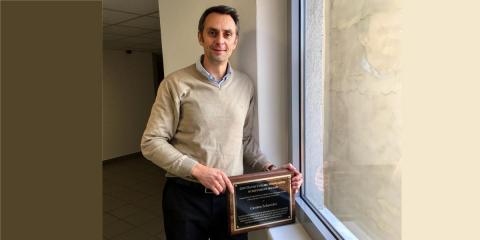 The award is presented annually to a mid-career political scientist to recognize distinction in methodological publications, innovative application of qualitative and multi-method approaches in substantive research, and/or institutional contributions to this area of methodology.

The committee decided to award Professor Schneider “for his research and teaching and for his contribution to qualitative and multi-methods research, and to the discipline of political science more broadly.”

“The American Political Science Association (APSA) is the biggest and most influential professional organization in the discipline of Political Science. The list of previous Collier Mid-Career Award Winners includes several of my intellectual heroes and I greatly admire David Collier with whom I had the pleasure to interact on several occasions in the past” Professor Schneider said. He added that within APSA, the Qualitative and Multi-Method Section belongs to the biggest and most active sections.

For Carsten Schneider it is important that the prize is given not for one particular achievement - a good publication or something along the line - but a variety of contributions and activities over the past decade or so. “In my case, it was publications in good outlets and with high citation rates along with building institutions in support of mostly young researchers in the form of summer courses and similar teaching activities, both in the US and in Europe.”

“It also makes me feel honored that the award committee did not shy away from awarding a ‘European’ scholar like me, someone who neither works in the U.S. nor holds any degree earned in the U.S. If I am not mistaken, this is the first time since the first award in 2010” he added.

According to the committee, Professor Schneider “is widely regarded as among the most important qualitative methodologists in political science of his generation. His research and writings on Qualitative Comparative Analysis (QCA) are well-known, influential, and agenda-setting.“ The committee mentions Professor Schneider and Claudius Wagemann’s book titled Set-Theoretic Methods for the Social Sciences (Cambridge University Press, 2012). “This widely acclaimed book has had a large impact – and one that continues to grow – and has become a go-to resource for QCA users.”

The APSA also stresses that Professor Schneider has a strong record of accomplishment as a scholar of political regime change. “Early in his career, in collaboration with Philippe Schmitter, he led a major effort to gather data on components of regime change, including liberalization, modes of transition, and consolidation, in different world regions. A co-authored article analyzing these data won the 2004 Democratization Frank Cass Prize for the best article by a young scholar. His first book, The Consolidation of Democracy in Europe and Latin America, also addresses the theme of regime change and itself makes important contributions to the study of regime consolidation.“

Evaluating his academic achievements, the award committee notes “that Schneider is on track to become one of the most cited political scientists in his cohort, regardless of field or topic.”

The committee also emphasizes that Professor Schneider’s role in institution building around qualitative methodology and research is “equally impressive” and that he gives frequent talks on qualitative and multimethod research at various universities in Europe and Latin America and has been invited to teach short courses on methods at more than 20 universities in Europe.

“It is worth noting that Schneider has been able to achieve all of this while working at CEU, including as Department Chair of Political Science, which has faced a most challenging and uncertain academic environment since the government of Victor Orban came to power in Hungary“ the APSA adds.

Carsten Schneider is professor at CEU’s Department of Political Science. Prior to joining CEU in 2004, he obtained his PhD from the European University Institute in Florence. His research focuses on political regime change and social science methodology.

From 2009 - 2014, he was an elected member of the Young Academy of Science in Germany and a John F. Kennedy Memorial Fellow at Harvard University during the academic year 2009 - 10. As its Founding Director, Schneider led the Center for the Study of Imperfections in Democracies (DISC) at CEU from 2008 to 2014.